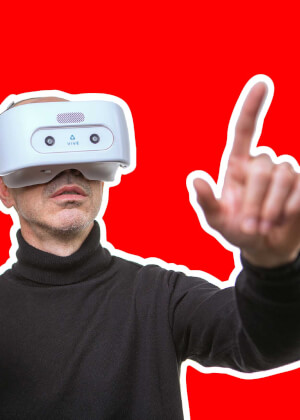 With our developers, we create virtual reality and implement it successfully and quickly in projects. On our topic page we inform you of from definition to cost of a VR project

How can the new direction GmbH support you in the area of Virtual Reality?

Virtual Reality consulting and programming are part of our service portfolio. We specialize in fundamentally understanding projects and to implement them exactly according to your wishes. With our customer-oriented agile methodology, we take an efficient and professional approach to software development. 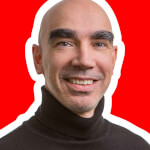 Do you have questions regarding Virtual Reality?
Please contact us! +49 (0) 821 543 70 00
Our developers are experts in virtual reality. As a new direction, we specialise in highly efficient learning

Definition: What is Virtual Reality?

In Virtual Reality (VR for short) a computer-generated world is created which the user can access by putting on special VR glasses or entering a special room.

VR technology reacts to interactions of the user. When the user is in the computer-generated reality and turns his head then the movement and the appearance is simulated by the glasses.

Via controller and input devices such as a 3D mouse or a data glove interactions in the virtual world can be performed.

Virtual Reality must be separated from Augmented Reality. In the case of AR, reality is enhanced by computer-generated objects. Together the two technologies are referred to as mixed reality.

We program applications for the Virtual Reality with our team. We have numerous data glasses in our lab, where our developers have the possibility to test the newly designed VR applications and to optimize them until release.
VR projects can be implemented faster and more successfully with this equipment. Proportions appear differently and the feeling is significantly better than with just programming on the screen. For the development of VR software our developers rely on the following three technologies:

For web applications, the framework of WebVR is best suited applying HTML and JavaScript. A Virtual Reality can be generated in the browser thus making it fairly easy for the user to gain first experiences with VR. For more comprehensive projects we use one of the following technologies.

Unity 3D is also a game engine. Many of the current VR games are programmed in Unity 3D. The technology is top performing and therefore well suited for interactive 3D graphics application. C, C++ and C# are used as programming languages.

The Unreal engine is based completely on C++. However, with the blueprint feature there is the possibility to use the framework also with less programming experience. Behavior and rules in the virtual world can be established by visual components. In general, with the Unreal engine you can work more exactly on the graphics.

With virtual reality, the learner is placed in an environment in which he playfully understands how to assemble a robot. The scenario provides an optimal learning environment for internalising work processes and knowledge.

Virtual Reality allows for illustrating the theoretical basis in a relevant and practical way, thus facilitating learning. The same principle applies to many other use cases, from learning to practical application as simulation.

The technology Virtual Reality is rapidly advancing. Both hardware, applications and software get better and more efficient.

The currently popular VR glasses are these:

The VR glasses or VR headset is the device with which you can immerse yourself in the virtual world. The glasses are connected to a game console, computer or smartphone, on which the VR application runs. VR goggles like the Quest make it possible to enter virtual reality without additional hardware.

The differences between the headsets lie in the quality of the resolution and the calmness of the image. These factors are decisive for how strong the immersion, i.e. the feeling of experienced reality, of the VR application has an effect on the user.

Costs for a Virtual Reality project

The costs of a VR project depend on the scope of the project.

For a price indication of the development costs we need information regarding the technical devices as well as the complexity of the environment and general requirements.

Do you have own ideas for a Virtual Reality application? Let’s talk about this idea and its successful implementation.

Virtual Reality has arrived in the mass market. Thanks to game consoles and smartphones there are the first applications and the price for the devices is affordable.

According to a forecast of the consulting company Digi-Capital the market of VR and AR technology continues to grow heavily.

Augmented Reality is said to receive stronger attention. After all, apps are easier to integrate in society and without using big hardware.

Our expert on this topic is Michael.